Here are a few random trucking trivia items that may shock  you? 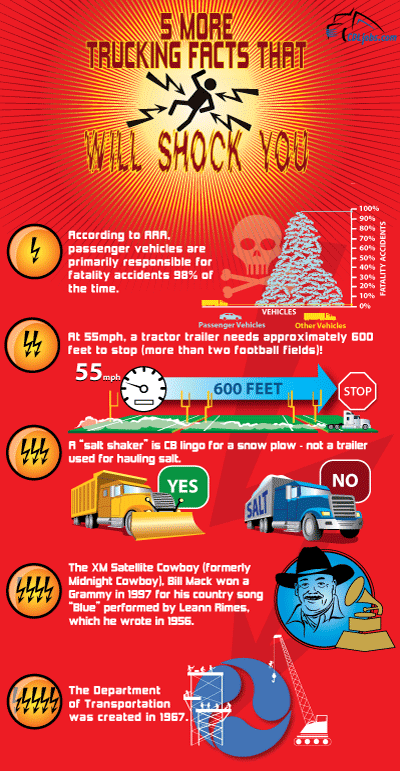 Test Your Knowledge of the Trucking Industry

1. According to the AAA, passenger vehicles are primarily responsible for fatality accidents 98% of the time.

2. At 55 miles per hour, a tractor trailer needs approximately 600 feet, or more than two football fields, to stop.

On average, for comparison, a passenger vehicle traveling at 55 mph can stop within about 130 to 140 feet, or about HALF the length of a football field. The greater a truck's weight and speed, the longer the stopping distance it requires. Given that a semi-truck and trailer may weigh four to five times more than what a typical car, even when unloaded, it is essential to use caution when driving near large trucks.

3. A "salt shaker" is lingo used over citizen band radio for a snow plow -- not a trailer used for hauling salt.

While many truck drivers in the modern era have moved to the use of cell phones and other mobile devices for their personal conversations over the road, many truckers still use CB radios to communicate with other truck drivers about road conditions. The use of call "handles" to identify one another is nearly non-existant, but CB lingo is not completely gone from the trucking industry.

According to Wikipedia, Mack's friend Roy Drusky suggested he pitch "Blue" to Patsy Cline in an effort to make the song a hit, so Mack gave a tape to Cline's husband Charlie Dick, but Cline died in a plane crash in 1963 before she could record it. Although recorded by at least five musical artists prior, the song became a multi-platinum hit for LeAnn Rimes in 1996.

5. The Department of Transportation was created in 1967, by an Act of the U.S. Congress.

The mission of the DOT is to serve the United States by ensuring a fast, safe, efficient, accessible and convenient transportation system that meets our vital national interests and enhances the quality of life of the American people, today and into the future.

That ends it for this round of trucking trivia. Check back for more fun facts, news affecting the trucking industry, and newly posted trucking job opportunities.

« PREV - Tips For Truck Drivers: Staying Focused On The Road Ten Essential Items For Every Truck Cab - NEXT »
back to top