Insider Tips On How To Improve Fuel Efficient Truck Driving 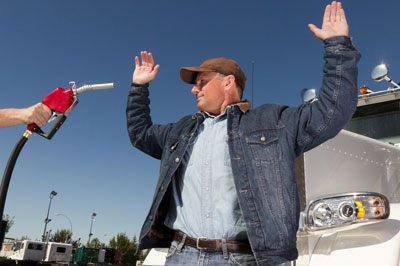 The volatility of diesel prices has reared its ugly head again, and the importance of fuel efficient truck driving cannot be understated. The average cost of fuel was just north of $3 per gallon in May 2019, according to the U.S. Energy Information Administration, and international political challenges could cause an uptick in the near future.

The U.S. leveled heavy sanctions on Iran and once oil-rich Venezuela has collapsed. It may be hard to imagine that issues that occur on other continents require fuel saving for semi trucks in America. Fortunately, the country is now the global leader in oil production and achieved energy independence in 2018. That success hasn’t occurred since the 1950s.

Fuel prices in New England and the mid- and lower-Atlantic states are approximately a full dollar less per gallon than those in California. Although the country is no longer held hostage by foreign fuel producers, fuel efficient truck driving remains a critical element of profitability. Every dollar a truck driver saves is another dollar in your pocket.

You may have noticed that sleek sports cars are designed to cut through air resistance or “drag.” The aesthetics aren’t just about looking good. The aerodynamically efficient design reduces friction and provides an acceleration edge. Similarly, world-class cyclists study aerodynamics to increase their racing efficiency. On the Tour de France, for example, a cyclist aims to reduce the amount of energy they expend to achieve maximum speed. That’s precisely the thinking truckers can employ to reduce fuel costs.

When air slams into parts of a rig, that creates an unnecessarily high level of drag that makes your engine work harder to maintain a given speed. According to some reports, upwards of 50 percent of an 18-wheeler’s fuel goes toward overcoming drag at high speeds. Considering that a majority of over-the-road freight hauling occurs on highways and interstates, reducing drag is a critical area in terms of fuel efficient truck driving. Industry insiders generally agree taking these three measures improves aerodynamic fuel efficiency.

According to RTS Financial, the cumulative impact of aerodynamic inefficiency on a carrier that spends $1 million on fuel equals approximately $140,000 in waste. That’s one reason new model rigs are being manufactured with a keen eye toward aerodynamics and fuel saving for semi trucks.

Major fleet outfits such as Walmart are reportedly bringing in trucks that are upwards of 20 percent more aerodynamically improved. Truck-makers such as Peterbilt, Cummins, and Airflow are working diligently to reduce drag and increase fuel economy. If you are an owner-operator or manage a fleet, drag-reducing accessories are likely to pay dividends.

Writing for Bloomberg, Jeff Plungis and John Lippert report that federal regulators have introduced legislation to require the trucking industry to cut carbon emissions through 2027. Specifically, the Environmental Protection Agency, or EPA, wants trucks to lessen their CO, or carbon monoxide, emissions by about 25 percent through efficient technology.

According to Plungis and Lippert, vehicle owners could save up to $170 billion in gasoline and diesel costs thanks to this new rule. When a truck doesn't emit as much CO and other volatile compounds, the vehicle uses less fuel as it hauls products across the country. Just as sedan and SUV drivers benefit from better miles-per-gallon rates, trucking companies also benefit from increased fuel efficiency.

Do the Math on MPH

One of the more difficult areas for professional truck drivers to manage is fuel efficient speed control. It’s no secret that driving at somewhat slower rates improves fuel economy. But, by the same token, the regulations regarding drivable hours have grown increasingly strict. Today’s truckers are tasked with striking a balance between fuel efficient truck driving and maximizing earnings.

The basic idea that truckers may want to keep in mind is that when you exceed 65 mph, fuel efficiency reportedly decreases by as much as 7 percent for every 5 mph. Many of the country’s highways post 65 mph as the maximum allowable speed limit. So, the 65 mph standard works seamlessly on these roadways. But when you travel in areas that allow 70 mph or higher, you will have some decisions to make about balancing fuel costs with drivable hours.

One way to decide whether to increase your speed above 65 mph lawfully is to do the math on how much additional fuel costs you will incur against mileage gained and time saved. The old saying that time is money has never been more true than when calculating mph against fuel saving for semi trucks.

The Federal Motor Carrier Safety Administration outlines the number of drivable hours a truck driver can work on a daily and weekly basis. Although the federal guidelines state how many, they do leave the men and women who haul America’s goods and materials a certain degree of flexibility.

One example of these “hours of service” indicates that professionals can drive 11 of 14 straight hours, with at least a 30-minute break. In terms of time and fuel efficiency, experienced drivers may want to consider where and when significant traffic occurs. When a truck comes to a standstill in parking lot-like traffic, a substantial uptick in fuel is used to operate in first and second gear to regain full travel speed. Simply put, a vehicle in motion uses less fuel over the same distance.

That’s why it makes sense to strategically plan routes whenever possible. Circumventing Washington, D.C.’s beltway during rush hour or crossing New York’s George Washington Bridge at high traffic times are certainly worth avoiding. Those are key examples that have localized examples all over the country. Route-planning to avoid stop-and-go traffic and construction zones saves truckers time and fuel expense.

Tricks of the Trucking Trade

They say experience is that best teacher. That certainly holds true in the trucking industry. Men and women entering into good-paying careers in the industry quickly discover that trial and error can be expensive. But by putting these fuel efficiency tricks of the trade to work, you can save a lot of money on fuel over the long haul.

Whether you are already working for a trucking company or are considering a career within the trucking industry, it is critical to understand that fuel efficient truck driving improves the amount of money professional drivers may earn. Taking appropriate measures to reduce diesel use is also an environmentally conscious way to protect the planet from unnecessary emissions. Every day people across the nation rely on commercial truck drivers to transport life’s necessities. At CDLjobs.com, we recognize that we’re all in it together.

« PREV - SHOULD EVERY TRUCK JOB IN AMERICA BE SALARIED? Get Your Driver Recruiting Mojo Back - NEXT »
back to top