Do You Know the History of Trucking?

All truckers know that keeping an eye on the rearview mirror is important.

The future of trucking is looking pretty bright, with over 3.5 million people employed as truck driving professionals, but the history of trucking matters as well.

How much do you understand about the history of the trucking industry? Let’s take a look some important historical facts that every long-haul trucker should know.

6 Facts You May Not Know about the History of Trucking

Alexander Winton is considered the Inventor of the Semi-Truck

The first semi-truck is credited to a Scottish immigrant named Alexander Winton, who sold his first truck in 1899. Based out of Cleveland, the Winton Motor Carriage Company first made passenger cars, but needed a way to deliver these products to their buyers. This need led him to create the first semi-truck, which was used by Winton and other car manufacturers.

Railroads Dominated Transportation into the 1930s

It’s easy to take the strength of the trucking industry for granted. While the car took over American roads by the 1910’s, thanks in large part to Henry Ford’s affordable Model T, the shipping and large transportation industry remained the realm of railroads. Heavy-duty trucks started to gain use after the First World War (1918), but didn’t become the masters of freight until the 1930’s. For those who care to learn more about why trucking is better than rail, view an earlier infographic.

The first National Truck Driving Championship was held in 1937, although it was then known as the “National Truck Roadeo.” This annual event pits the nation’s finest truckers against each other in a test of skills, knowledge, and professionalism. The nationwide competition starts with state-level qualifying and culminates in honoring the country’s best.

The Interstate Highway System Got Rolling in 1956

The Federal Aid Highway Act, passed in 1956, authorized the creation of 41,000 miles worth of interstate highways. This legislation, championed by President Dwight D. Eisenhower, put $25 billion in funding towards a 20-year construction plan. Without this law, a fundamental to the history of trucking, and the highways it built, the national trucking industry would be very different today.

There Have Been Two Laws Called “The Motor Carrier Act”

Ironically, the two acts had opposite goals. The Motor Carrier Act of 1935 restricted practices in the industry, which was unregulated and making significant gains on the railroad up to that point. The goal of the first act was to rein in unstable, cut-throat competition among trucking companies. The Motor Carrier Act of 1980, however, sought to deregulate the industry, giving it more freedom over hiring, prices, and operations.

Held each year in mid-September, the National Truck Driver Appreciation week first kicked off in 1998. Throughout the history of trucking, this event has sought to highlight the work of safe truckers throughout the country, reminding the American public that without truckers, the economy, and our day-to-day lives, would be vastly different. It may not be the most celebrated event of the year, but it’s an important time for everyone to show their appreciation.

6 More Trucking Industry Facts You May Not Know 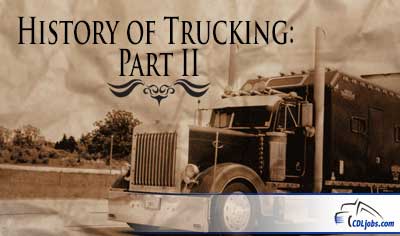 Regulation of the Transportation Industry Dates Back to the 1800’s

While trucks wouldn’t come to dominate the transportation and shipping industry until the 1930’s, there were government regulations long before the first truck was shipping goods. The 1800’s saw large regulations that monitored the railroad companies, preventing them from charging outrageous freight and protecting against unfair competition.

In the early days of the trucking industry, there was no weight limit regulating trucks. The obvious problem: road damage. This damage was especially severe due to the fact that many trucks of the era had solid rubber or even iron wheels. In 1913, four states (Maine, Massachusetts, Pennsylvania, and Washington) enacted separate weight limits. Every state eventually had their own regulations, but it wasn’t until 1981 that all states adopted a uniform weight limit of 80,000 pounds.

The American Trucking Association was Assembled in 1933

First “Hours of Service” Rules Were Seen in 1938

The first Hours of Service (HOS) rules were seen in in 1938, limiting drivers to 12 hours behind the wheel and 15 maximum hours on duty. By 1939, they were already being overhauled, with changes to on-duty and off-duty hours. They have been reviewed over and over throughout trucking history and the current hours of service rules will likely change with proposals under review by the Federal Motor Carriers Safety Association.

Department of Transportation (DOT) is Created in 1967

Everyone’s favorite government organization was created in 1967. Say what you will about their service, but this organization has been crucial in overseeing requirements like driver’s license standards, maximum hours, and monitoring the overall fitness of CDL drivers. Every truck driving job in America is subject to scrutiny, so it is always wise for truck drivers to conduct their own pre-trip inspection each time you head out so make sure you are prepared if you are hit with a DOT inspection.

One of the greatest shifts in the trucking industry came as a result of the 9/11 terror attacks. After this tragic, world-changing event, the government enhanced security regulations on shipping, especially related to hazardous materials. It’s now harder to get a HazMat license, and you may expect that working for trucking companies that transport hazardous materials will require more testing and background checks, making 9/11 one of the most important events in trucking history.

Quality Trucking Jobs for Any Driver

The trucking industry as we know it today is sure to change over time. However, the need for the transport of goods across the United States is sure to remain as consumer needs continue. The men and women of the driving force will continue to be in great demand and trucking jobs will remain plentiful. Do you want to be a part of a respected industry with deep historical roots and a promising future? There are a number of top-quality trucking companies looking for drivers just like you.

You can have the truck driving career you’ve always wanted, but it starts with finding the right position with the right trucking company!

« PREV - What is the Difference between Trucking Companies? Are you Ready for Winter Truck Driving? - NEXT »
back to top