The Impact of Self-Driving Trucks on the Trucking Industry 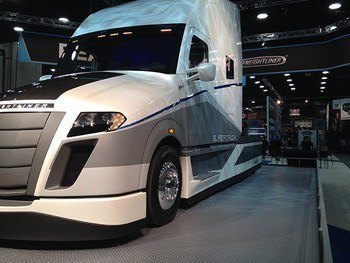 As you likely know, self-driving vehicles are becoming increasingly common. Automated trucks have many concerned about what the impacts will be on the trucking industry. Although they have not yet made a major splash, self-driving trucks are not just a possibility in the far-off future. They are already a reality. In 2016, a fleet of trucks navigated across Europe. Chances are that self driving semi trucks will play a big role in the trucking industry in the years to come.

Over the last few years, the trucking industry has struggled with truck driver shortages, cost containment and accidents. Self-driving trucks are likely to alleviate some of these issues, like the reliance on drivers.

The American Trucking Association has predicted that the driver shortage will increase by 175,000 by 2024. That is a huge increase beyond the 48,000-driver shortage reported in 2015. Self-driving trucks can help lessen the shortage and enable trucking companies to run profitably.

Self-driving vehicles are better able to avoid accidents and ease congestion, especially once a large percentage of the vehicles on the road are automated. Most accidents are caused by human error, especially following behind vehicles too closely. Automated vehicles don’t make these types of mistakes. They also don’t get tired and need to stop for sleep.

Another important benefit of automation is that the truck can drive more efficiently, thus reducing emissions. The self-driving technology is also evolving along with electric vehicles, which are also more environmentally friendly.

It will take some time before the technology is fully perfected. However, it is getting very close. Trucks will likely benefit especially because they generally stick to highways and interstates. These roads are generally easier to navigate for self-driving vehicles.

Many fear that self driving semi trucks will put a lot of truck drivers out of work. If a truck could operate completely autonomously, businesses would be able to slash costs for driver pay. As of 2018, there were nearly 2 million heavy and tractor-trailer truck drivers in the United States. If a large portion of those people lost their jobs, it would have a major impact on the economy.

However, the advent of self-driving trucks does not mean an end to the truck-driving profession. Currently, self-driving vehicles need a driver to be present in the case of an emergency. Many require the driver to periodically touch the steering wheel to confirm that he or she is paying attention. Freight that may be unpredicatble and require driver attention, such as the transport of livestock, may not lend itself well to complete driver-less automation.

Most manufacturers are focused on level-three automation. This is sufficient automation to drive without human input but still must have a driver for critical events. Additionally, some roads are not well-suited for automated vehicles and may require the presence of a human driver. Nonetheless, level-three automation reduces driver stress and exhaustion, making everyone safer.

It is likely that the technology will eventually advance to level-four automation, trucks that don’t need drivers. However, for the near term, there is still a need for drivers. This is partially due to regulatory hurdles involving  automated vehicles on public roads. Furthermore, the current technology may require additional training. Drivers who get that training may find themselves in higher demand than ever.

Automated trucks can use wireless technology to communicate with each other. This is ideal for platooning. The first truck in the convoy sends data to the following trucks, allowing for more efficient operation. As mentioned above, each of these trucks needs a driver at present. However, they can operate with minimal input, especially when using platooning.

Truck platoons can operate more efficiently. They can also maintain a shared speed and reduce their impact on traffic congestion. The smarter the technology becomes, the more the trucks can optimize themselves for less wear and tear and reduced fuel consumption.

The technology may reach the point at which a driver can man the first vehicle and the remaining trucks run fully autonomously. This would reduce the demand for drivers. However, there is a massive shortage of drivers already, so that will have little impact on employment opportunities.

Self Driving Semi Trucks and the Trucking Industry

There is no question that self-driving vehicles will have a huge impact on the trucking industry. They present new challenges as well as new opportunities.

Truck drivers should avoid panicking over the potential reduction in truck driving jobs. Automation is here to stay and will keep advancing. The better route is to embrace the technology and try to keep up to date with it. Automated trucking will create numerous new jobs and opportunities for those who are willing to help pioneer it. Stay current on the advancements and you may find yourself more in demand than ever before.