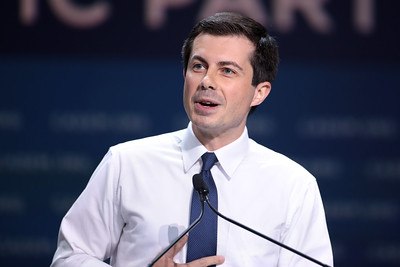 Pete Buttigieg (Boot-Edge-Edge) has been nominated as President-elect Joe Biden’s Transportation Secretary. Buttigieg is the former mayor of South Bend, IN and gained significant national recognition during his 2020 presidential campaign. If confirmed as Secretary of Transportation, Buttigieg would make history as the first openly gay person to lead a Cabinet department.

Biden confirmed reports of Buttigieg’s nomination via Twitter. In a tweet, Biden said, “Mayor @PeteButtigieg is a leader, patriot, and problem-solver. He speaks to the best of who we are as a nation. I am nominating him for Secretary of Transportation because he’s equipped to take on the challenges at the intersection of jobs, infrastructure, equity, and climate.”

Buttigieg tweeted a statement of his own accepting the nomination. “This is a moment of tremendous opportunity—to create jobs, meet the climate challenge, and enhance equity for all. I’m honored that the President-elect has asked me to serve our nation as Secretary of Transportation.”

“Innovation in transportation helped build my hometown,” Buttigieg went on to say, “and it propels our country. Now is the time to build back better through modern and sustainable infrastructure that creates millions of good-paying union jobs, revitalizes communities, and empowers all Americans to thrive.”

Build Back Better is one of many plans Biden detailed that would directly impact the trucking industry. To “build back better,” Biden and Buttigieg will ensure that the future is “made in America,” and in all of America; build a modern infrastructure and an equitable, clean energy future; create a 21st century caregiving and education workforce to help ease the burden of care for working parents; and advance racial equity across the board in America.

As a top candidate in the 2020 Democratic primaries, Buttigieg was the first prominent millennial and LGBT presidential candidate in one of the two major political parties. After Buttigieg dropped out of the presidential race and immediately endorsed Biden in March, Biden was propelled as the frontrunner among Democratic candidates.

The Road Toward Nomination

The nomination has received mixed feedback. Critics of the news attack Buttigieg’s lack of experience. As mayor of South Bend, Buttigieg did not manage transportation operations on a massive scale. The city, with a population just over 100,000, has fewer than two dozen public bus routes.

Advocates for the newly nominated Secretary of Transportation point to his successful leadership on transportation initiatives as mayor. Buttigieg secured $200 million in private investment in downtown South Bend, funding that would spark citywide job growth and facilitate innovative private partnerships that improved city transportation. Additionally, he revitalized the city by redesigning city streets and spurring major economic investment through his Smart Streets initiative that brought life to what was once thought of as a “dying city.”

Others celebrate the move for its historical significance. President of the Human Rights Campaign, Alphonso David, said in a statement that Buttigieg’s “voice as a champion for the LGBTQ community in the Cabinet room will help President-elect Biden build back our nation better, stronger and more equal than before.”

Buttigieg replaces another “first” in the Department of Transportation. Elaine Chao, who served as President Donald Trump’s Transportation Secretary, was the first Asian American woman to be appointed to the President’s Cabinet when she served under President. George W. Bush as the Sectary of Labor from 2001 to 2009. Both Buttigieg and Chao are graduates of Harvard University.

Confirming the Next Department of Transportation Leader

There is little reason to suspect Buttigieg will not be confirmed as the next Transportation Secretary. Historically, only three Cabinet nominees have been rejected in the past 100 years. A series of Republican senators told Politico that they would vote to confirm President-elect Biden’s Cabinet nominees as long as they are “mainstream.”

GOP Senator Lindsey Graham of South Carolina said in November that, “If (Biden) does win (the election), then he will have the right, I think, to a Cabinet. I don’t mind voting for people I wouldn’t pick or have a different view than I do. I’m just not going to vote for a socialist.” In the presidential primaries, 38-year-old Buttigieg was widely regarded as a younger alternative to 78-year-old Biden since the two share many moderate views.

The timetable for when the Senate will vote on Buttigieg’s appointment is unclear. Democratic Senate minority leader Chuck Schumer has repeatedly lobbied for confirmation hearings to begin immediately after the Georgia Senate runoff election on Jan. 5. However, it appears far more likely that Republicans will opt to wait until after Inauguration Day on Jan. 20 to begin voting on Biden’s Cabinet appointees, including Secretary of Transportation-elect Pete Buttigieg.