Self-Driving Trucks are Coming, Which Isn't a Bad Thing

America’s 3.5 million truckers have eyeballed the industry’s creeping automation for years. Tech businesses and industry experts alike are racing to land the first driverless trucks. Some suggest automation’s impact on professional drivers will be huge. Others, however, urge drivers to take a step back before assuming the industry’s full automation. 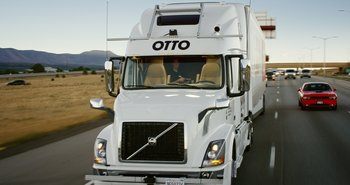 Driverless trucks are expected to be safer than their human-controlled counterparts. This doesn’t mean America’s professional truck drivers will be squashed by the automated machines, however. Truckers currently haul over 10 billion tons of freight every year, which is a tough job. The hours are long, the pay varies and the lifestyle is sedentary for most.

A White House report in December suggests a 60 to 80 percent loss of over 2.5 million truck driving jobs, globally, once automation is fully underway. Automated trucks will be safer, more economic and easier to direct towards long-term goals. By removing drivers from the shipping equation, corporate players might save a decent amount of money.

The Challenges of Automation

Self-driving trucks will face significant challenges. Loading docks, primarily, pose an issue for robots and software designed to follow highly systematic procedures. While specialized robots can move single boxes and totes in conveyor-belt fashion, even running motorized tuggers to move trailers around a cargo yard, they lack the flexibility to be truly relied on.

The Road Isn’t Necessarily A Better Place, Either

Automated trucks aren’t necessarily superior road-warriors, either. While automation eliminates the dangers of driver fatigue, it still has problems. What happens if a mechanical issue occurs? If an air line breaks, how will it be fixed? While automation can certainly cater to these problems, its development will likely be slow. Automation simply isn’t designed to identify the many symptoms of complex truck issues in the same manner than a professional truck driver can.

The truck driver’s new role may be behind a desk, rather than a wheel. As automation evolves, current drivers may find themselves becoming tech experts. While some may serve as industry consultants, dock workers and technical workers, others may find themselves performing auxiliary truck functions. A trucking industry backed by automated trucks isn’t inconceivable—but we’ll probably witness a human responsibility shift as opposed to its complete removal.

These “drivers” may not drive at all. Instead, they’ll remain in the trucks to perform various functions, quick fixes and communications. Even with automated trucks, deliveries to storefronts and houses are still well beyond the horizon. Today’s industry gurus are tinkering on small, electric vehicles to deliver goods. There’s a chance modern truck drivers may find themselves behind these seats, too, though they’re not expected to exist for another 20 years.

Is This Better for the Driver?

The difficulty of finding, recruiting and keeping long-haul drivers is a notorious industry problem. In fact, it’s partially responsible for the purposed shift to automation. The American Trucking Associations, which regularly lobbies Washington, estimated a driver shortage of roughly 40,000 workers in 2014. This situation is improving slightly, but it’s still symptomatic of underlying problems.

Some believe the change in trucking job requirements may be beneficial to drivers. When humans aren’t directly needed for vehicle navigation, higher-paying, preferred jobs are created. Self-driving truck “fetching” is one such job. Likely, similar jobs will be created to compensate for automation’s persistent problems. As a result, truckers will find safer, higher-paying work.

While drivers’ jobs will be relatively safe as self-driving trucks are implemented, millions of jobs outside the cabin may be effected. Ironically, the driver may have the least to worry. Town networks based around truck stops, where stores, gas stations, laundromats and restaurants exist to serve drivers, may be out of luck. If self-driving trucks take over, service jobs in these areas may be under threat. Self-driving trucks may still need maintenance before and after their trips, but their on-route needs will probably be slim where surrounding services are considered.

What Does the Future Hold?

Industry leaders, political leaders, and company leaders are still tinkering on the problems of automation. Self-driving companies are beefing up their lobbying teams, getting ready to shape their industry alongside pre-existing providers.

Meanwhile, the question of self-driving truck regulation is still in play. A lot of uncertainty surrounds the entire development of self-driving trucks, but industry pros are working on it. Today’s truckers may become tomorrow’s cargo inspectors, truck “dispatchers,” or local cargo drivers. Even if robots are steering the wheel, plenty of other jobs still need to be completed—jobs which, at the end of the day, may pay more money for the same industry experience.

« PREV - Meet the Electric Semis Getting Ready to Roll Out Thinking of Truck Driving School? The Federal Government Might Pick up the Tab - NEXT »
back to top