What Do You Think of the FMCSA Truck Driver Training Proposal? 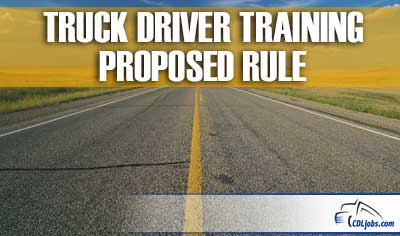 In  an effort to enhance the skills of CDL drivers and improve the overall safety of America’s roadways, the Federal Motor Carrier Safety Administration (FMCSA) has proposed a new set of rules that would change the truck driver training requirements for new or upgraded CDL drivers.

Rules Would Affect Only Those Getting a New License or Upgrading

If and when the truck driver training rules go into effect, they would apply only to people who are getting their license for the first time, upgrading their license (getting a Hazardous Materials certification, for example) or someone seeking to reinstate their CDL. Anyone who already has a CDL and doesn’t plan to change won’t have to concern themselves with this new truck driver training requirement.

As of Right Now, the Rules Are Proposed, Not Passed

It’s important to highlight that as of right now, the truck driver training rules are merely proposed and have not become an official mandate. While all the signals indicate that this training rule could go into effect, it’s not a law just yet, and even when it does pass, there will be a few years before it is implemented after the passing of the final rule.

In the interim, the FMCSA is allowing public comment on the proposal. Anyone interested may review the potential truck driver training rule and provide their public comment by Wednesday, April 6, 2016.

Assuming it Passes, It Will Be Three Years Until it is in Effect

If and when the training regulations pass, there will be a three-year grace period that will allow schools, states, drivers, and companies to prepare for the changes. The three years would be used to modify information systems and record training provider’s information. It would essentially be a chance to allow drivers, companies, and trainers to adapt to the new rules and determine how the added costs of training will affect the industry.

Truck Driver Training Would Be a “Hybrid” Approach

According to the FMCSA, the new CDL training would combine both behind-the-wheel hours and theoretical study, although there is currently no proposed minimum number of hours that drivers would have to spend on the theory portion. The proposed truck driver training regulations for new Class A drivers include a minimum of 30 hours of behind-the-wheel training with at least 10 hours on a driving range. For Class B, the rules would require 15 hours behind the wheel, with at least 7 hours on public roads.

There will Be Some Truck Driver Training Exemptions

The rules would affect a large portion of the truck driving industry, but there would be a few exemptions. This would include most military drivers, farmers, and firefighters. Other exemptions may include drivers from Alaska, farm-related industries, and more.

What are your thoughts on the Truck Driver Training Proposal?

• Is the amount of training proposed sufficient? Excessive?
• Will the added costs of training be a barrier for new drivers to enter the industry?
• Will trucking companies absorb any portion of the truck driver training costs to keep bodies in seats?
• Will better trained truck drivers save the industry money in the long run?

All of these are crucial factors that need to be worked out before the truck driver training rule can be effectively implemented. Join the discussion on our Facebook and Twitter social media channels (icons found at the top of this page). We want to hear your thoughts!

Accelerate Your Future with a High-Quality CDL Job

Visit CDLjobs.com and we can help you find a trucking job that is the right fit for you and your family. Get in early and avoid the challenges of the potential new rule!

Whether you are looking for a company job or an Owner Operator position, you’ll find plenty of opportunities from leading trucking companies.

« PREV - Are truck driver benefits important to you? National Distracted Driving Month Heightens Awareness For Truck Drivers - NEXT »
back to top