What Truckers Should Expect at a Weigh Station 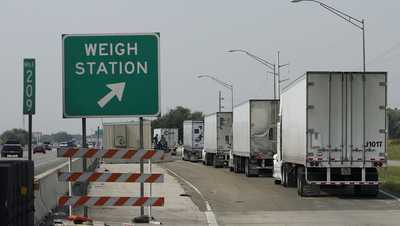 Why Are Weigh Stations Necessary?

Most states require trucks and commercial vehicles that are over 10,000 pounds to stop at open weigh stations along their route. Altogether, a loaded truck can't weigh more than 80,000 pounds according to federal law. Exceptions are sometimes granted if the load cannot be broken down and separated. However, these exceptions expire upon delivery of the cargo.

Trucks that are overloaded pose a particular hazard on U.S. highways, both to their drivers and to other motorists. Even under the best possible road conditions, a truck weighing more than 80,000 pounds is more difficult to control. Safe operation can become even more difficult if the conditions are not favorable. Excess weight puts pressure on the tires, increasing the possibility of a blowout. An overweight truck may be more likely to roll over, and stopping distance is increased when a truck is overloaded, making collisions with other vehicles more likely.

What Happens at a Weigh Station?

Obviously, one of the most important functions at a weigh station is to determine whether or not the vehicle is overloaded. Trucks at a weigh station may be assessed by the axle, or the whole vehicle may be measured. Some weigh stations have rolling scales that allow you to keep the vehicle in motion while it is being weighed. Other scales require you to stop. If your vehicle is found to be over the weight limit, you may be waylaid at the station until arrangements can be made for another truck to take on the excess.

In addition to weighing the vehicle, officials at a weigh station may take the time to check your electronic logging device (ELD) to ensure that you are in compliance with applicable hours-of-service laws. Weigh station officials may also conduct an inspection of your vehicle's equipment to ensure that it is in safe working order. Equipment that may be subjected to a safety inspection includes, but is not limited to, the following:

Additionally, inspectors may also check to make sure that the vehicle is not leaking fluids, such as antifreeze, oil, or fuel. A truck that fails the inspection may be taken off the road until the issue is sufficiently remedied.

What If You Don't Stop?

When driving a commercial vehicle, the law requires that you stop at an open weigh station whenever you come upon one. The penalties for failing to do so vary by state. You may lose your commercial driver's license, and in a few jurisdictions, you could even face jail time.

What Is the Weigh Station Procedure?

As you drive along the interstate, be sure you look for signs that indicate that there is a weigh station ahead. The signs will give you the information you need regarding whether the station is open or closed. If it is closed, you are not required to stop. If it is open, there will probably also be a sign indicating the speed limit that you need to observe upon your approach.

There may be other trucks already in line at the weigh station. If so, you will have to join the line and wait your turn. Follow the signs and/or the instructions given to you by the weigh station personnel. It is very important that you observe the posted speed limit as you drive over the scale, as well as the directions that relate to stopping and/or slowing. Failure to do so may result in unnecessary delays and inconvenience for everyone.

The next step at a weigh station is the inspection of your equipment and check of your electronic log. If the inspection uncovers any equipment that is missing or faulty, a more detailed inspection will have to take place. Similarly, a problem with your log data can also cause significant delays. However, if everything is in order, the weighing and inspection should not take long at all. In the interest of keeping your log accurate, personnel at the weigh station will enter your DOT number into a computer system and perform a check of your safety rating.

What Can You Do To Help the Process Go More Smoothly?

The best thing you can do is perform a check before you set out. While problems can arise on the road, ensuring that your load weight is under the limit and that everything is in order at the beginning of the trip can help prevent delays later.

Additionally, be sure that you are polite and professional in all your interactions with weigh station personnel. Becoming rude or belligerent won't get you through the weigh station any faster, but it can make the experience unpleasant for everyone.