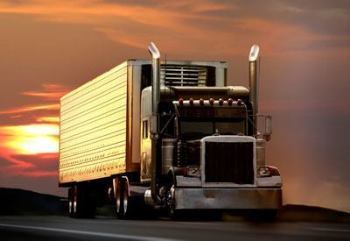 What’s the single most famous semi truck of all time? While that question might not be easy to answer, there are some serious contenders for the title. Share your thoughts and comments with us via any of our social media outlets at the top of this page.

These trucks are recognizable throughout pop culture, and you don’t have to be a truck driver to appreciate their style, designs, and attitude.

Take a look at our choices for five of the most famous semi trucks from American film and television, in no particular order!

Snowman’s Kenworth W900 from Smokey and the Bandit
Smokey and the Bandit is one of the most iconic and well-known movies of all time, and while some people swoon over Burt Reynolds’ black Trans Am, truckers know that the true star of the film was Snowman’s Kenworth W900 with a gorgeous wild west mural trailer. Three different trucks were actually used during filming. Two were 1974 models and the third was a 1973 model, which can be picked out by the gold Kenworth emblem. (The ’74’s emblems were silver.)

Rubber Duck’s 1977 Mack from Convoy
While this film might not hold the same level of pop-culture fame as Smokey and the Bandit, Convoy is a favorite among truck drivers across the country. While there were numerous Mack trucks used to create the film, Rubber Duck’s truck is generally a 1977 Mack RS712LST, which is now on display as the Museum of Transportation in St. Louis. While the truck’s black paint and grille guard make the vehicle look mighty tough, the most famous element is the flexing duck for a hood ornament.

Optimus Prime from Transformers
He’s the leader of the Transformers (at least the good guys), and he’s probably the best known semi truck in modern American popular culture. Throughout the multiple generations of Transformers, Optimus Prime has taken the form of many different trucks. He was first represented as a cab-over Kenworth K100, but he has also been a Peterbilt truck. In the latest film starring Mark Wahlberg, Optimus Prime was a custom-built Western Star semi.

The Green Goblin from Maximum Overdrive
It’s hard to forget a murderous semi truck that is bent on killing all of humanity, but the main villain from Stephen King’s campy horror film becomes even more memorable thanks to the Green Goblin grille. Green Goblin’s face, taken from Spiderman, is mounted on a Western Star truck that chases Emilio Estevez in this so-awful-it’s-fun-to-watch 1986 movie.

B.J.‘s Kenworth K100 from B.J. and the Bear
This short-lived television comedy series has remained in the hearts of Americans, and truck drivers in particular, as the red and white Kenworth K100 is one of the most famous semi trucks of all time. The show only lasted from 1979 to 1981, but it is referenced in pop culture even today. Shows and movies like South Park, 30 Rock, Breaking Bad, and My Name is Earl have all referenced the show or the truck itself. One of the trucks from the original series has apparently been restored and is actually being used by a hard working trucker to this day.

Find Your Semi Truck and New Trucking Career with CDLjobs.com

No matter which truck you love, CDLjobs.com has an abudance of trucking jobs posted that may be just right for you!

Visit CDLjobs.com to find a great job in the trucking industry. You will ind a trucking company that fits your needs and your life, so search our postings today.

« PREV - Is Your Significant Other A Truck Driver? Credit Education For Truckers: FICO scores - NEXT »
back to top