Truck drivers are tasked with cumbersome and evolving new CDL laws that they must comply with to earn a living. While meeting the standards of a new truck driving law or new truck driving regulation puts an additional burden on everyday drivers, many involve important safety considerations that truck drivers should not ignore.

The additional problem that truckers face is keeping up to date on regulatory and state law changes that impact them. These are new rules and regulations that veteran and beginner drivers should consider. As 2019 rolls out, visit CDLjobs.com for updates on these and other regulatory changes, news, and postings of new truck driving jobs.

Canada appears to be following a similar timeline used by the U.S. in its rollout of mandatory electronic logging devices to track hours driven. Surveys focused on Owner Operators indicated as many as 30 percent said they would exit the trucking industry as it took effect on Dec. 18, 2017. While some retirements did occur, many of those drivers who remain in the trucking industry and have been rewarded with improved earnings.

Spot market freight rates reportedly increased from $1.67 per mile to $2.24 by January 2018 and hit $2.31 over the summer. Industry insiders are expecting rates to steadily grow, and Canada’s rollout is expected to be fully implemented by the end of 2019. Existing ERD devices will reportedly remain acceptable through 2022. The implementation of the new truck driving regulation in Canada could help drive earnings up even further.

Many freight companies and drivers are finding the FMCSA’s new guidance on the use of commercial vehicles for personal conveyance confusing.

Under new rules, an off-duty status may now apply even when the vehicle is laden as long as the use is not to the benefit of the carrier. This improves upon existing rules because it allows truck drivers who inadvertently exceed their workable hours through things such as loading times to relocate the vehicle without being cited for an infraction. These are things that may generally be allowable under the new rules.

There will be strict limitations under the new guidelines that include prohibitions such as the following.

Drivers are advised to err on the side of caution when exercising the new, more relaxed rule.

The recently signed U.S. Mexico Canada Agreement includes a wealth of new regulations that are likely to benefit American truck drivers and workers in other sectors.

The deal now allows the U.S. to set limits on freight hauled from Mexico that present a “material harm or the threat of material harm to U.S. suppliers, operators, or drivers.” Many owner-operator trucking leaders were reportedly active during the negotiations, and the White House appears to have back U.S. truckers.

The deal also puts limits on goods, materials and specifically automobile components that originate overseas that try to use America’s neighboring countries as a backdoor into the U.S. market. The new regulations under the USMCA are likely to create more work in U.S. ports as a result in 2019. 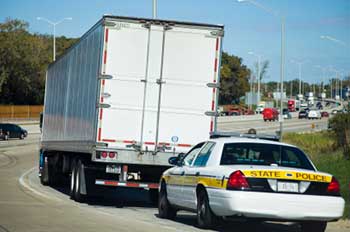 Heading into 2019, the federal agency plans to ramp up fines on the vast majority of existing trucking-related driving infractions. While these are not new DOT regulations, the DOT appears to be increasing penalties under the Federal Civil Penalties Inflation Adjustment Act Improvements Act of 2015 that allows such agencies to increase fines in an effort to keep pace with inflation. The uptick was implemented in late 2018 and penalties will reportedly grow by 1.02 percent across the board. This is a short list of expected increases.

Professional truck drivers can expect penalties to increase on any and all driving errors in 2019.

The country appears to be divided about the lawful carry of firearms. Some states are moving to permitless, or “Constitutional Carry” laws, while others are attempting to limit legal gun ownership.

In Pennsylvania, a state lawmaker introduced a bill that would criminalize a trucker carrying a loaded weapon in the vehicle. Truckers are all too familiar with some of the more dangerous locations they must pull into and rest under the strict hours-driven laws. This Pennsylvania proposal and other firearm issues should be carefully considered by truck drivers who carry a weapon for self-defense. Although the bill has yet to become state law, truckers are advised to stay abreast of shifting gun legislation and new CDL laws in 2019 and beyond.

Although the safety benefits that chained tires can provide in snowy weather are immense, many states have strict regulations on the use. Washington state has toughened its enforcement by leveling increased fines on truckers who use unapproved chains to negotiate snowy roads. Penalties for chains that do not meet the state’s standards can run as high as $500. The stricter enforcement emerged in December and is expected to be tough through the spring of 2019.

CDLjobs.com is your source for updates on these and other pending trucking regulations, news, and up to the minute information about high-paying trucking jobs.