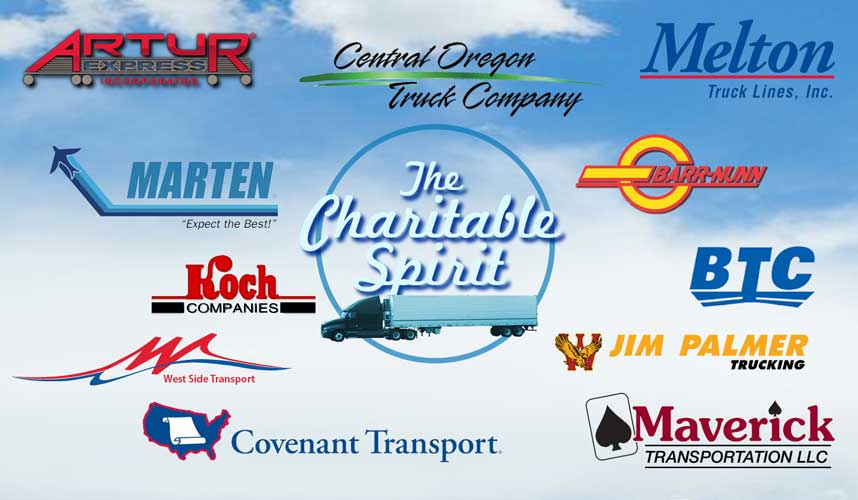 One of the best parts of my job is that I get to work with a lot of great trucking companies who employ great people who do great things. The trucking industry has always represented itself well by participating in programs aimed to benefit others. I truly believe it comes from a corporate culture where most trucking company owners started with very little and built a successful company through hard work and dedication. People like this tend to remember “where they came from” and are quick to give back.

They do so without any expectations of recognition or thanks. They do so because they feel it is just the right thing to do. I’m not nearly as reserved, and I don’t mind sharing some of the wonderful things that our trucking clients participated in during 2016 that makes me personally proud to be in business relationships with them. So, here are a few…

The Trucking Industry Unites to Lend a Hand

West Side Transport, a family-owned trucking company based in Cedar Rapids, Iowa, has been exceeding driver and customer expectations for over 45 years. They recently raised $31,364 to buy a trailer and wrap it to start hauling freight to contribute towards a cure for cancer with their Convoy for A Cure campaign.

Melton Truck Lines, who has been a leader in the air-ride flatbed trucking business since 1954 announced a partnership with FASTPORT through the Hiring Our Heroes Trucking Track program in a joint mission to educate Veterans about the variety of career paths trucking offers and provide them with employment opportunities with the industry.

Maverick Transportation was started in Little Rock, Arkansas, in 1980 and has built its reputation on safety, technology, innovation, and a progressive mentality of doing things the “Maverick Way.” In September 2016, they hosted the Central Arkansas World’s Largest Convoy, which raises awareness and funds to allow Special Olympics participants to train in year-round sports activities.

Mondovi, Wisconsin, based Marten Transport has been the premium supplier of time and temperature-sensitive transportation services since 1946. Because of their employees’ hard work, they were able to make a donation to help update the teen lounge at Mayo Eugenio Litta Children’s Hospital at Mayo Clinic Hospital, Saint Mary’s campus in Rochester, Minnesota. The hospital is a 148-bed facility where infants, children and teenagers, receive the highest quality medical care from common problems to the most complex situations.

Builders Transportation is a family-owned and operated flatbed trucking company in Memphis, Tennessee. They’ve been in business since 1961, and this year they collected donations and provided the Desoto County Animal Shelter in Nesbit, Mississippi, with over 200 pounds of dog and cat food, 100 pounds of cat litter, and a large selection of pet treats and toys.

Granger, Iowa, based Barr-Nunn Transportation has been in business since 1982. They are a proud sponsor of both the 2015 and 2016 Wreaths Across America program, which transports over 700,000 memorial wreaths to be laid at 1,000 locations in the United States and beyond. Ceremony locations include the Pearl Harbor Memorial, as well as Bunker Hill, Valley Forge, and the sites if the September 11 tragedies.

When a group of trucking friends got together and started Central Oregon Truck Company in 1992, one of the founding principles they had was to give back to the industry. They do so every year through the Wreaths Across America program, as well as participating in several local / regional charitable organizations: Christmas for the Kids, Boys and Girls Club of Central Oregon, the local Booster Club, Redmond Old Fashioned 4th of July Celebration, Deschutes County 4-H and Redmond Area Parks and Recreation.

Jim Palmer Trucking and their partner-carrier Wil-Trans have also been involved in the Wreaths Across America program as well as being a transporter for The Wall That Heals, a 250-foot replica of the Vietnam Veterans Memorial which honors the nearly eight million Americans who served in the U.S. Armed Forces during the Vietnam War. It bears the names of the more than 58,000 men and women who made the ultimate sacrifice in Vietnam.

The weekend before Christmas 2016, Covenant Transport partnered with another Chattanooga-based trucking company to deliver more than 6,000 Christmas wreaths to Chattanooga National Cemetery for the graves of veterans with the Wreaths Across America program. They also partnered with the Lookout Valley Lion’s Club to collect toys and food box items for needy families living around Covenant’s Chattanooga headquarters.

When students at Barack Obama Elementary School in St. Louis wanted to help the families affected by the Flint, Michigan, water contamination crisis, they reached out to Artur Express, who showed up with a day cab and a brand-new trailer to load the 20,000 bottles of water collected for transport to Flint.

In a society where too many are self-involved and not willing to lend a hand to other, those in the trucking industry from truck drivers to top level executives, are often at the front lines when disaster strikes or people are in need. Thank you to all the trucking companies and their employees for the sacrifices, gifts, donations, and time that go into these awesome stories of generosity, it doesn’t go unnoticed. As I said, we are proud to be doing business with the people who do good things…keep on trucking!